In a city that lacks bodega egg sandwiches, what’s the move? After some research, we rounded up five very Pittsburgh options.

Breakfast sandwiches are an important part of my America.

When the proportional construction of fat, carbs, and protein is just right, it can provide that perfect, quick, handheld sustenance to power you through a long day, after last night’s happy hour encored into the wee hours of the evening. This is why I was concerned when I first moved to Pittsburgh. Beyond not being able to buy beer at a gas station, I quickly realized that egg-sandwich-slinging bodegas and delis are nearly non-existent. I had to search elsewhere.

This is a subjective topic. Any “best of” article is – which is why I generally don’t write them. Yet as I began my indulgent search for Pittsburgh’s best breakfast sandwich, I quickly learned that there are many different philosophies to digest. It wouldn’t feel right to recognize just one style, just one philosophy. So consider this a “these are very solid options” article, rather than a “best of” piece.

A Look at our Breakfast Sandwich Methodology

The PPP pillars that make a great breakfast sandwich:

Context can play a major role. Whether it’s the charmingly grumpy person behind the counter that you’ve managed to befriend, the perfect accompanying beverages in the cooler, or the selection of newspapers available as you wait for your fuel, nostalgia and emotions can play into the overall joy of your on-the-go breakfast. I have taken this into account in an effort to remain as objective as possible, but I am a romantic after all.

I have not tried every breakfast sandwich in Pittsburgh. I have had many great local breakfast sandwiches that I did not include, and this list has no particular order of rank. I’m sure I have missed some true gems along the way, and I would love to hear what’s out there that I still need to try.

If it’s not listed below it’s NOT because it isn’t great.

1) Pear and the Pickle 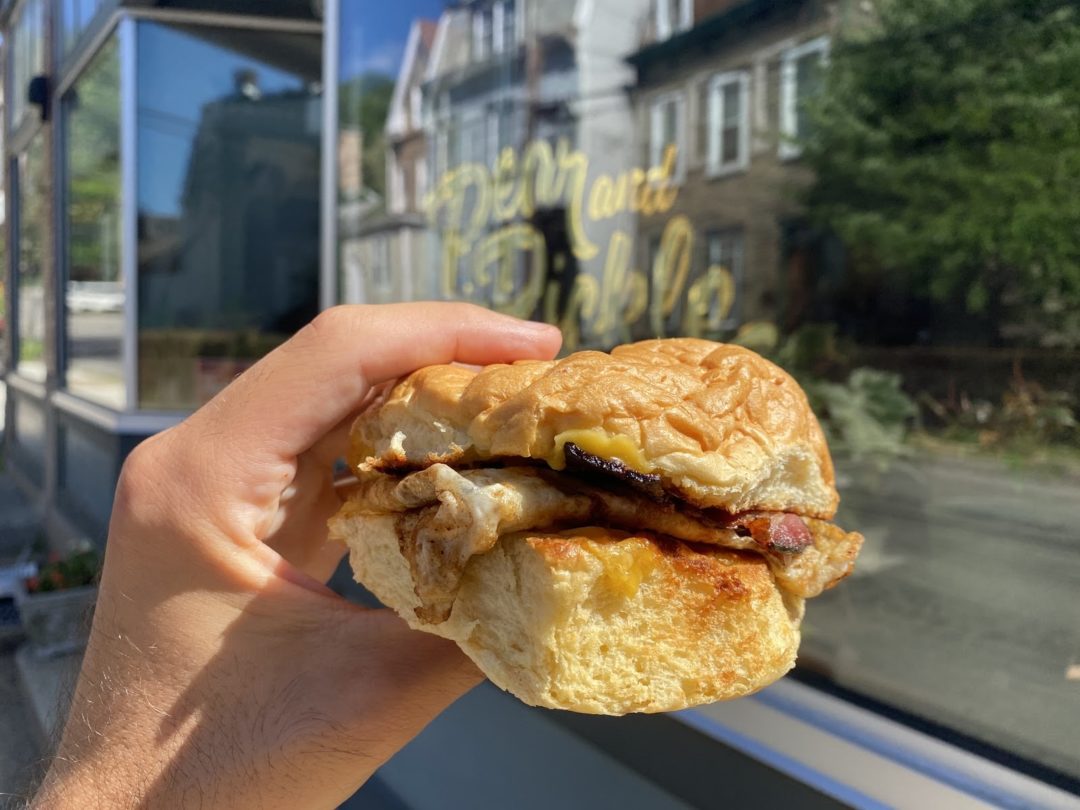 This sandwich saved me. After months of eating $13 breakfast sandwiches with housemade aioli, seasonal vegetables, and fancy bread, I was led to this instant classic. Tucked up on Troy Hill, Pear and the Pickle’s quirky cafe-deli vibes deliver a nearly perfect, no fuss bacon, egg, and cheese. A greasy, peppery fried egg, presumably cooked in bacon grease, quality bacon, your choice of cheese (American for me), slapped between a slightly sweet and airy kaiser roll, making for an easy one-handed attack.

Price is a little high, but for an establishment that avoids cutting corners at all costs, it’s worth it. I’m also a sucker for the tomato, egg, and cheese which drops you down to $6.75. The early morning vibe outside of La Prima and Colangelo’s in the Strip District is basically what allured me to Pittsburgh. Not the suburban infiltrated weekend madness, but the calm weekday mornings as the city begins to rise. The old boys club playing cards, smoking cigars, and drinking cappuccinos while all the other suckers get ready for work. The suits coming in for a quick morning buzz, an Italian newscast on the television, and an overall calm, yet slightly chaotic vibe that temporarily pulls you away from the modern world, and plugs you into a beautifully simple ecosystem, high on espresso.

I often pair my La Prima cappuccino with a square of Colangelo’s pizza (I go redtop when they have it), but when I need real fuel I know where to look; the breakfast croissant.

A perfectly buttery, flaky, rectangular croissant, folded like a heavy down comforter, holding a greasy, fatty, protein rich rendezvous, all snuggled up for consumption. I go for the egg, ham, and cheese. They also do one that subs the ham out for bacon, and a veggie one that subs in tomato, which are also very good.

The whole sandwich gets cooked together, which makes for a unique egg. The egg is whole, it has a yolk, but based on cook time, the yolk sets to a dryness similar to that of its hard boiled counterpart. This might normally be slightly off-putting, but the butteriness of the croissant and meltiness of the provolone really step up to fill in where the egg falls short. An inspiring display of teamwork.

The only knock here is that this sandwich can be inconsistent. Generally, it’s when the sandwich doesn’t get heated up enough, but this inconsistency strangely enough makes for euphoric moments when they get it just right. Make sure to have them heat it up and eat it right away. You’ll want to hold this thing in the wrapper or have a napkin nearby. Yes, it’s that greasy. 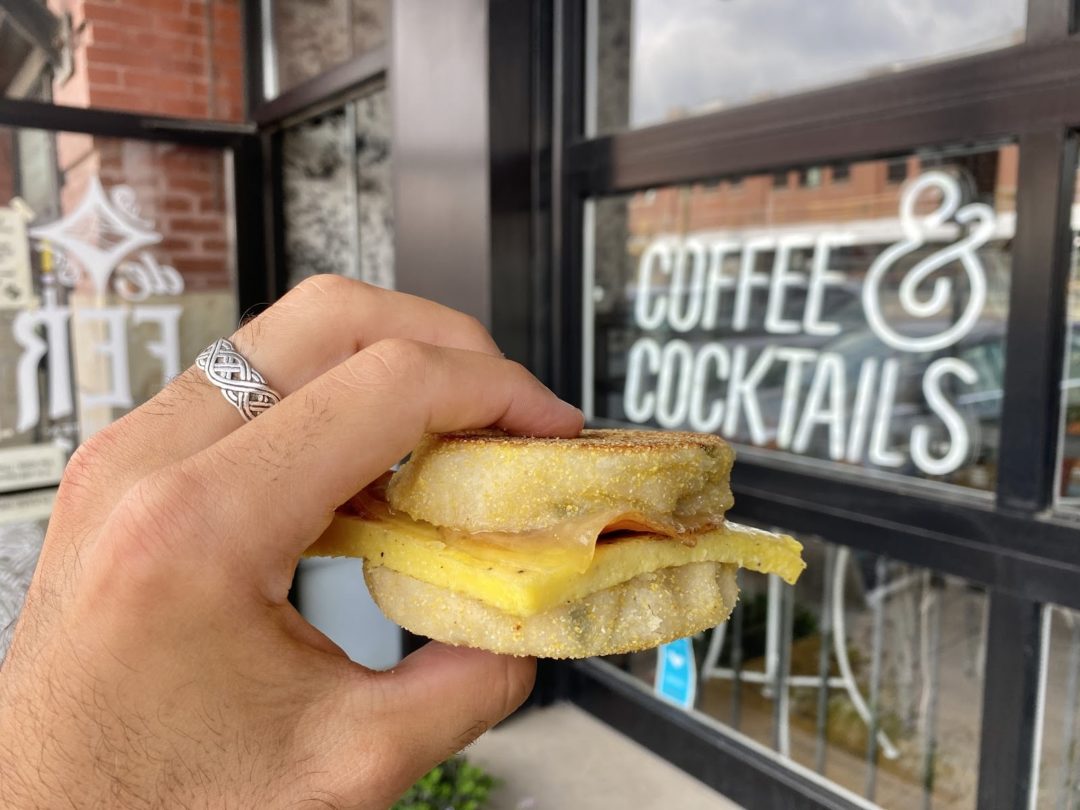 This is easily one of the most texturally pleasing bites in all of Pittsburgh. The way the semolina covered English muffin’s outside layer cracks through to a chewy field of buttermilk and chive-infused gluten, giving way to a core of crispy pancetta, mild cheddar, and a dense, yet fluffy fresh cracked egg, baked with parmesan is truly something special.

This sandwich is clearly carefully calculated and well engineered. So much to the point that I found it almost off putting when we first met. The stovetop-less operation has opted into using baked eggs, that are prepared into a perfect yellow square that hangs out the sides of the sandwich. It looks as if Ronald McDonald’s hipster son took over the family business and made some serious tweaks to the breakfast menu.

The texture mixed with a powerful umami parmesan-pork punch is surprising from what appears to be an innocent little sandwich. The portability factor of it is outstanding as well. I’m not one to eat food in my car–not my deal–but bring this for a ride and you will likely leave no trace, beyond a few loose grains of semolina.

The construction of this sandwich truly allows for every bite to be consistently perfect. After a tragic tortilla maker accident in the early days of quarantine, Lawrenceville’s Smoke Barbeque Taqueria adapted quickly, temporarily morphing into Smoke Burgerque Chickeria, and then finally Smoke Sandwich Shop. The sandwich shop hasn’t lost any of its personality in the seemingly seamless transition. Beer and house cocktails to-go, at times slightly archaic ways of ordering and accepting payment, and food that makes you go “oh shit” at first sight.

The egg and cheese sandwich remains right on brand.

A housemade buttery brioche acting as the bookends to a heaping portion of housemade American cheese, house cured thick-cut bacon, a generous layer of fresno mayo, and an ever so slightly drippy fried egg. All from scratch, and big in every way imaginable.

This sandwich does not deliver on the portability front, and it’s not supposed to. This is a two hander. But every once in a while you truly need that sandwich that is going to demand your attention and drip down the side of your hand.

A great offering, though I hope to one day have another Smoke egg taco with nugs. Pittsburgh isn’t a bagel city. This means that if a bagel is your ideal vessel for a bacon, egg, and cheese, you’re likely making it yourself, or eating it on some lousy store bought bagel. The other, far superior option is heading over to Lola’s Eatery in Lower Lawrenceville. There you can find Zoe Rieder baking varieties of fresh bagels daily, filling the void for the community’s local bagel enthusiasts.

Don’t let its cuteness fool you. An explosive fried egg will be sure to send yolkey rivers through the small cavities of the thick-cut bacon and any opening of the freshly cooked bagel – yes, this includes the northern hole of the sandwich. The application of its dairy adhesives–melty cheese on top, cream cheese on the bottom–holds the sandwich together, in what otherwise could be a catastrophic mess.

Don’t be afraid to get your hands dirty with this one, but if on the go, I recommend the scrambled option.

It’s a strange time for restaurants. Feeding people dishes that originally had been thought up as something to eat in-house can be unsatisfying at times, for both restaurant and guests. This is why eating what is seen by many as the ultimate to-go breakfast brings a sense of normalcy to the exchange. The breakfast sandwich is a humble comfort in a world of uncertainty.

Even in a city that might not display it on its surface, one thing remains true, the breakfast sandwich will always be there for you.

David Neimanis is a cultural producer and writer from Buffalo, NY. After spending years on the road as a traveling musician, Neimanis migrated to Pittsburgh, PA where he now spends his time writing about food, culture, and the ways in which makers, artists, and entrepreneurs build and shape communities. Neimanis is also the Partner Experience Manager at 412 Food Rescue. In his spare time you can find him making pizza or foraging for funky bottles of wine.

A guide to Christmas bar pop-ups in New Orleans

It wouldn’t be Christmas in New Orleans without a few magical cocktails and bar experiences to match! Here’s our guide to drinking your way into the holiday spirit this season.

Obviously there’s some hesitancy by many to eat inside restaurants at the moment, so I did some research to find out which restaurants were available for take-out, outdoor seating or both! This way you can each this longtime tradition without putting yourself at more risk than you’re comfortable with.