The uninitiated might associate pysanky purely with Easter celebrations, but there’s more to the story, explains Pittsburgh-er and lifelong pysanky-maker Melissa Rogers. The tradition came out of ancient pagan Ukrainian beliefs.

“In the winter, the world died, so in the spring, to celebrate the return of the Sun God, they would decorate eggs,” explained Rogers.

They believed there were evil spirits in the world and by decorating the eggs with intricate line designs, they could trap the spirits within the eggs.

“I don’t even know when it began, but it was a very ancient tradition,” said Rogers, who’s been teaching pysanky workshops almost as long as she’s been making them, and she has taught several classes at Workshop Pittsburgh in the past.

Eventually, the practice was adopted by the church, and pysanky came to be an Easter tradition in Ukrainian churches and homes. Pysanky can be made and displayed year-round and plays into many Ukrainian traditions, but the practice reaches its peak come Easter-time.

How do you make it?

Pysanky stems from the verb “to write.” Using melted beeswax and a kistka, or stylus, a line design is drawn on the egg. Similar to batik-making, wherever the line is drawn, the dye won’t take. When the drawing of the design is complete, the artist dips the egg into a dye. Then, additional lines are drawn and the egg is dipped again, creating complex, multi-colored designs over a series of dips and drawings. 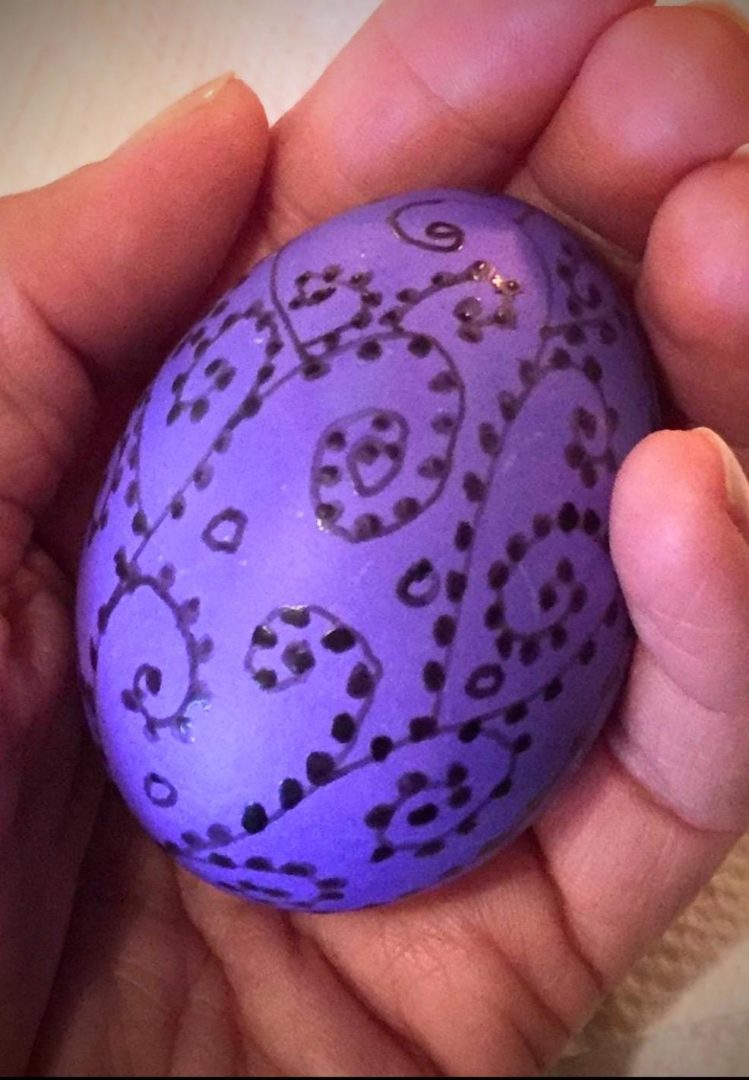 Any line drawn in beeswax is permanent, “so any mistake you make, you just have to try to work it into your design,” says Rogers. “It’s very symbolic of life. When you make a mistake, you have to figure out how to live with it and how to, you know, make it part of your story.”

Since the egg is raw, the artist has to be delicate with it, making the process tedious for some. Depending on the size and style of the chosen design, a single egg can take anywhere from 45 minutes to several hours to create. After the egg is dried and treated, you can blow out the yolk and white, leaving a hollow egg for your display case. Beginner pysanky-makers typically stick to chicken eggs, but professionals design and dye ostrich and goose eggs, creating elaborate and colorful designs.

While traditional patterns prevail, Rogers delights in the new designs she sees in workshops.

“I like when somebody is new and they’ll come up with a design that I would’ve never thought of,” Rogers said. “People who don’t think of themselves as being super creative will have an amazing idea, and the egg will reflect that.”

Rogers and her six siblings learned the art of pysanky from their father, who learned it in turn from his grandmother, who immigrated from the Ukraine.

“My grandmother taught him to make the pysanky when he was 4,” Rogers explained. Coincidentally, Rogers began learning at the same age from her father. “I grew up in Warren, PA, and my dad always did demonstrations at schools and at craft fairs. And so I grew up always going to those things and being a part of those things. He always had an egg room in his house where he would just have all this stuff set up, and he could just do eggs all year if he wanted to.” [📸 Pysanky in the palm of a hand. Photo: Melissa Rogers]

Open to beginners and experts alike, Rogers stresses that taking home an egg you make is only half of the experience.

“Teaching workshops on pysanky has been encouraging to me because I feel like when something that ancient, like it’s sad to see the practice die off,” Rogers said. “And so the fact that it’s not dying off–if anything, it’s becoming more visible — I think it’s a really good thing to keep those traditions alive.”

St. Peter and St. Paul’s Ukrainian Orthodox Church in Carnegie will host a pysanky workshop this weekend, and their annual pysanky egg sale takes place Sunday, March 28, 2021, and will feature over 1,200 hand-painted eggs.

Where else can I find pysanky eggs?

Check out these two Etsy shops – Love4Pysanky & Carol Novosel Art to purchase pysanky eggs that are handmade here in Pittsburgh.

If you want to try making your own pysanky, you can find kits, supplies and books on Amazon. There is even a children’s book about making pysanky.

This story was originally published in 2019 and has been updated for 2021.