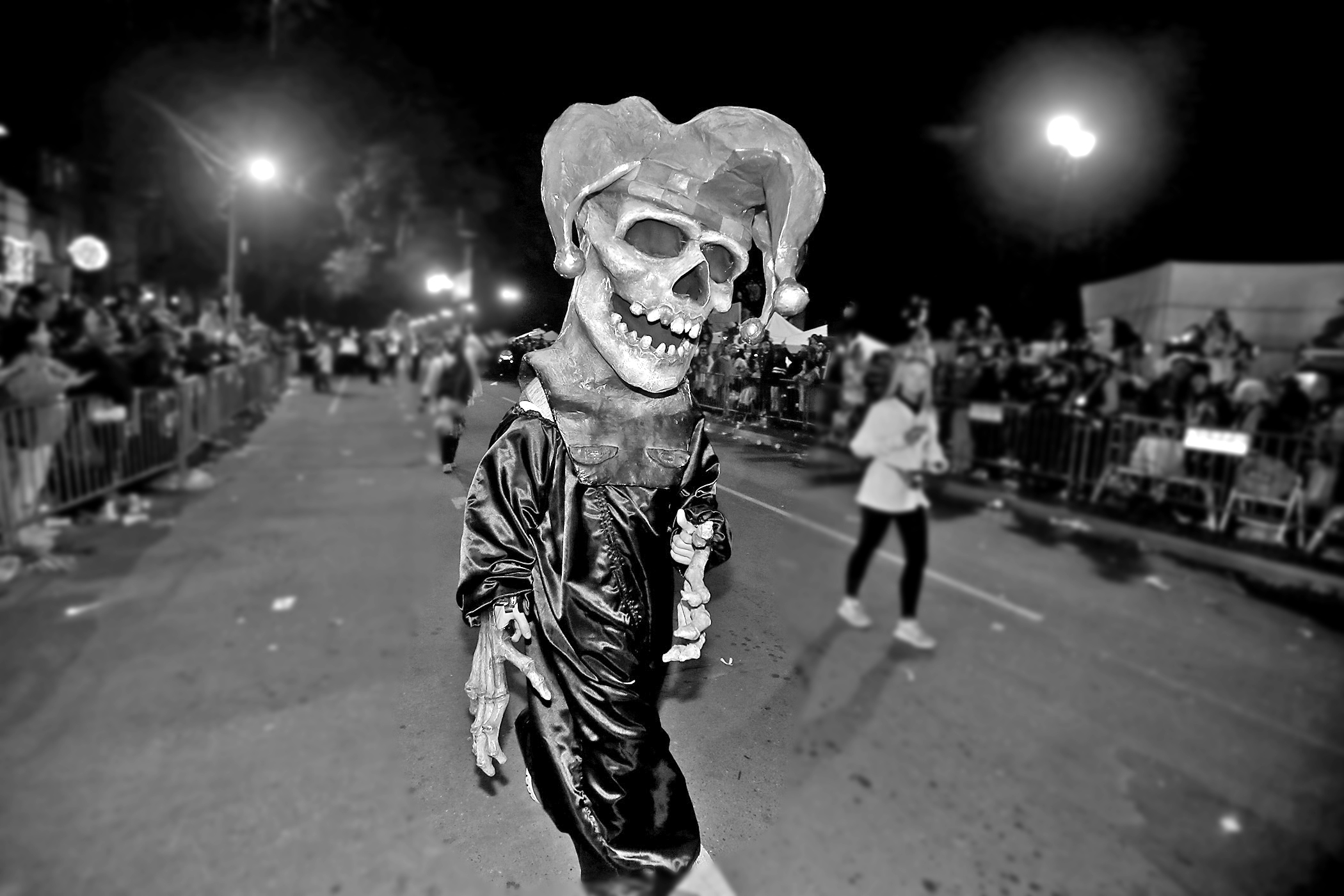 As Carnival parades return to the streets of New Orleans, revelers and krewes might not realize they are celebrating life alongside the dead, with many purportedly haunted spots on or just a doubloon’s throw away from the parade route.

As Carnival parades return to the streets of New Orleans, revelers and krewes might not realize they are celebrating life alongside the dead, with many purportedly haunted spots on or just a doubloon’s throw away from the parade route. There are of course several parade routes in New Orleans, but the most well-traveled in some form is the route that rolls on St. Charles Avenue from Uptown to Canal Street, passing those who have already said farewell to the flesh but are still hanging around for the party. What follows, in order, are the ghostly venues Carnival parades pass as they make their way downtown.

One of the first and most recognizable landmarks parades on the Uptown route will pass is the historic Columns Hotel in the 3800 block of St. Charles Avenue. A bevy of (mostly) well-behaved and gregarious ghosts grace the majestic mansion. The best-known of these is the “Woman in White” who floats through the ballroom, a spirit purported to be that of Ida, the wife of the man who built the Columns in 1883, tobacco magnate Simon Hernsheim. Ida died unexpectedly in 1895. Other stories say Ida can only be seen outside on the sidewalk, mournfully staring at her former home.

Many of hotel’s rooms have their own unique ghosts: A pair of weary middle-age women take an eternal rest break in Room 10. In Room 20, the floating torso of a handsome, square-jawed older man appears, a man who is a dead ringer for the aforementioned Simon Hernsheim who died by suicide in 1898 having never gotten over the death of his wife. In Room 21, a ghostly hand rocks people to sleep in the daybed and appears in the bathroom mirror. In Room 25, things disappear only later to reappear, as if a ghostly prankster is at work.

Parade-goers on St. Charles at Fourth Street are close to two famous ghosts who like to mess with utilities. Just a few steps river-bound from the parade route is the former 1891 Castle Inn where guests encountered the “translucent man,” so called because he appeared only in peripheral vision or in mirrors. In life, he was a servant who smoke, drank, sang, and partied like it was 1899. Unfortunately, he died in an accidental fire, apparently while sleeping one off. His spirit haunted the inn for years, playing tricks on guests by moving or hiding items and switching TV’s and radios on and off.

The second ghost at the 1891 Castle Inn was that of a barefoot little girl in a white dress named Emily who had drowned in a pond behind the property. She spent her afterlife turning water faucets on and off when she wasn’t bouncing on guests’ beds or touching them on the leg. Emily was also said to wander the sidewalks and neutral grounds looking for her mother like every other New Orleans kid has done at a parade at some point. It’s not known if the pair stuck around after the hotel closed and became a private home a few years ago.

The historical Pontchartrain Hotel has stood in the 2000 block of St. Charles Avenue since opening in 1927. It was originally an apartment hotel where a pair of rich spinster sisters lived on the 11th floor. It is said one sister decided to kill the other by setting a fire in the apartment, but ended up killing them both, as well as several other residents. A husband and wife who died on the ninth floor in the fire are said to haunt that floor’s ice machine. The sisters themselves continue to appear on the 11th floor, gossiping and bickering for all eternity.

If you follow the parade down the route to the 1300 block you will come to the site where a famous resident once lived: the devil. Yes, THE devil. The legend goes that around 1840, Old Scratch took one Madeleine Frenau as his wife and built a mansion for her at 1319 St. Charles Avenue. While some say Devil’s Mansion appeared overnight, others said it was built in just seven days. At sunset, Satan could be seen peering down on the street, horns and all. Mrs. Devil nee Frenau’s home was reportedly staffed by little red demon cooks, housekeepers and servants, like an eternally damned Downton Abbey. However, despite her lavish lifestyle, Madeleine got bored and began an affair with a local Creole gentleman named Alcide Cancienne. The Devil caught on and offered her paramour a load of money to leave town. Alcide was tired of the affair anyway and told Madeleine at a private dinner he was leaving town with the loot. She accepted this and moved on.

Just kidding, she brutally murdered him by strangling him with a napkin. The Devil chose this moment to return home. Having already grown weary of his mistress, the Devil gathered up Madeleine and her fatally napkin-ed lover and had a late dinner on an upstairs balcony, the main course being the former couple. He then left town. Today, a hotel stands at 1319 St. Charles Avenue. Whatever curse was afflicting the Devil’s mansion appears to have disappeared with the building itself as there haven’t been reports of any hauntings by the hotel’s staff.

Gallier Hall, the marble three-story Neoclassical building across from Lafayette Square, is a traditional stop on Mardi Gras Day; from viewing stands set up on the steps of the former city hall, the Mayor of New Orleans toasts the Queen and King of the Zulu Social Aid and Pleasure Club and Rex, the King of Carnival. But one Mardi Gras reveler may never have left. A poltergeist, theorized to be the spirit of a man knifed to death on the steps of Gallier Hall during a 1972 Mardi Gras Day parade, bangs doors and is generally disruptive and noisy, especially on the rarely-used third floor. A second ghost that is said to hang out on the steps of Gallier Hall is that of the cruel Union General Benjamin “Beast” Butler, so nicknamed for his heavy-handed treatment of New Orleanians during the occupation of the city by the Union Army. He was the kind of jerk who would intercept a stuffed toy thrown from a float clearly meant for a child.

Just before parades turn onto Canal Street, they cross over Common Street on St. Charles Avenue. It was inside a store near this intersection in August of 1873 that employees heard a commotion coming from a third-floor storeroom while working late one night. One clerk crept up to investigate but was assailed by a group of tall, chain-rattling, skinless apparitions. Tearing back downstairs, he told his companion of what had happened. The second clerk investigated and was met by a blood-red woman who handed him a pair of yellow slippers. Needless to say, the clerks bolted.

It turned out that about 25 years earlier it was discovered that a chef named Gaston had fled Paris after killing and feeding two pantry boys to one Count de Treville. To avoid prosecution, Gaston absconded by ship to New Orleans where he reinvented himself as a shoemaker named Feraud. He opened up a shoemaking business on the first floor of the Common Street building, but also disguised himself and ran a boutique restaurant on the second floor under the name of Valentin — and he was one evil bastard. He purchased, murdered and served slaves as food and used their skin to make his shoes. When his wife Soline discovered his horrible secret and confronted him, she too was served at the restaurant (not as a patron.) Her skin was used to make the pair of yellow slippers for the daughter of a Monsieur Cantrelle. However, they were quickly returned when Cantrelle complained that the shoes spoke to his daughter, grumbling that they belonged to someone else. As the authorities closed in, the skinned body of Gaston/Feraud/Valentin was discovered in the building, the ghosts of those he so brutally murdered having taken their revenge. The talking yellow slippers were never found, but the ghosts remained, wailing restlessly from the third floor of the Common Street building.

And it’s not just buildings along the parade route that attract ghosts, but even particular parades themselves; While the motto of the Krewe of Mid-City is “Pour La Joie de Vivre” (“For the Joy of Living”), one paranormal investigator believes the parade is greatly enjoyed by the dead as well. Psychic and paranormal columnist Mickey of Miami declared the Krewe of Mid-City’s annual procession to be “The No. 1Most Haunted Parade in America.” She theorizes that the signature handmade foil that the krewe uses to decorate their floats attracts “spirit forms, ectoplasmic mist, orbs and spectral images” which are visible in photos of the parade. You can check for yourself when the city’s fifth oldest continuously parading krewe hits the intermittently haunted Uptown parade route on Feb. 27 at 11:45 a.m.

Mickey of Miami. “The #1 Most Haunted Parade in America.” HauntedNewOrleansTours.com. http://www.hauntedneworleanstours.com/parades/ Accessed January 2022.