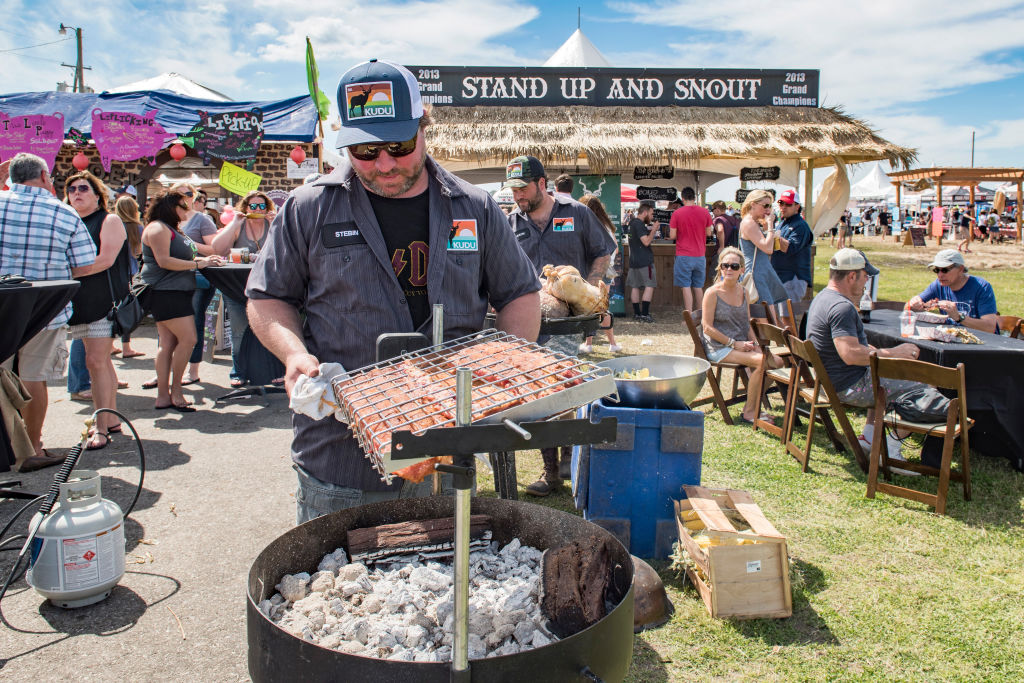 “There are no less than four things to love about Hog’s for the Cause,” explained festival co-founder Rene Louapre. “Of course, we’ve got plenty of barbecue, but then we’ve also got an amazing live music line-up, plenty of drinks, and — this one’s really important to us — a cause that is near and dear to our hearts.”

“We have team members coming to compete from across the country — some from Alaska,” Louapre said. “Maybe they join because they love barbecue or they want to do something fun and different with friends. But knowing we’re helping so many kids get through the most difficult of times — that’s what keeps people coming back year after year.”

Louapre co-founded Hog’s for the Cause with his childhood friend, Becker Hall in 2009. The duo grew up in Old Metairie and, like most New Orleans-area kids, they were raised in a culinary wonderland, though one in which barbecue was not a central component.

“Barbecue — and particularly whole hog barbecue — has its roots in more rural areas,” Louapre said. “You see it in the areas around Lafayette, and other rural parts of the American South, but it’s not something you would have historically found in places like New Orleans. We had a more ‘sophisticated’ city food here.”

But when the pair left for college — Louapre to Washington and Lee University in Virginia, and Hall to the University of South Carolina — they were exposed to a barbecue culture that largely was absent from their hometown.

When they returned to New Orleans, they brought their love for barbecue with them.

“All across the south you see these festivals celebrating barbecue,” Louapre said. “We thought it would be fun to throw that kind of party in New Orleans, too. I mean, we love a good festival here.”

As the two organized their inaugural event, they learned that the young son of a mutual friend has been diagnosed with a particularly deadly form of brain cancer. Louapre and Hall decided to donate funds from the festival to help the boy receive treatment.

“We learned so much about this terrible killer and how difficult it can be for families. We also learned how we could help. Once we did, we wanted to do that every year.”

Hogs, as the festival is affectionately called, typically attract somewhere between 20,000 to 30,000 attendees each year. This year’s festival is at the UNO Lakefront Arena Festival Grounds (6801 Franklin Ave). It will kick off on Friday (April 1) and conclude Saturday night.

The gates open to the public at 3:30 p.m. on Friday, though Louapre said the competitive teams get there long before that.

“All teams will begin preparing for the judges and attendees as early as sunrise on Friday morning, and many of the local teams began setting up their barbecue pits weeks ago,” he said.

The more than 90 teams can be found around the festival grounds with names such as “My Hammy Vice,” “Porkchopitoulas,” “The Pig Easy,” “Mr. Pig Stuff,” “Silence of da Hams,” … OK, you get the oink…I mean point. Said teams have two main goals: First, sell their food to you — the public — so they can raise money for pediatric brain cancer; and, second, wow the judges with their creations to win awards in a series of categories.

“One thing that sets our barbecue festival apart is that, rather than limiting teams to one preparation method, we let them barbecue however they want,” Louapre said. “Some do lechon, some do boucherie, others do cochon de lait, some traditional barbecue, and others barbecue their hog in a bathtub. Anything goes.”

That variety of style means there’s lots of variety for you to try when you attend. On Friday teams will compete in categories such as Bacon, Chicken Wings, Barbecue Sauce, and Mayo-based Sides. Judges will be rating the team’s entries in a private tent while you’re able to purchase them (with proceeds going to support the Cause) out on the festival grounds.  On Saturday, the categories are pork ribs, Boston butt/pork shoulder, whole hog and the mysterious-sounding “porkpourri.”

There are a variety of competition categories — from food-related to fundraising-related — but to be crowned “Grand Champion” on Saturday night, a team must perform well in at least three of Saturday’s four categories, as well as have raised more than $4,000.

Hogs for the Cause is also packed with an incredible live music line-up on multiple stages. Friday’s headliner is Galactic with special guests Luther Dickinson and Corey Glover, while Saturday features Shakey Graves. That’s just the tip of the musical iceberg, however.

Whether you’re there for the music, the food, the drinks, or the (fingers crossed) amazing weather, you’ll see that the funds raised for pediatric brain cancer is front and center. In the two years leading up to last year’s festival, teams raised nearly $3 Million!

Those funds include food sold at the festival, of course, but that’s not the only way teams raise money. In one of the more unsung (and fun) aspects of the festival, when the music acts end on Friday night, many of the teams throw parties at their pits that go into the early hours of the morning. Members of the public are welcome to attend, and some of these parties include musical acts of their own. There is an admission price to join some of these extravaganzas, but they all add to that fundraising total.

“We have teams that have been raising money all year,” Louapre said. “Some of them host smaller festivals in their hometowns and cities to fundraise. There’s an 8- or 9-team competition in Montgomery, Alabama that one group hosts, a pig roast event in Lake Tahoe, another in Charleston, and a hatch chili festival in Atlanta. And all of those events add to our efforts to support families with children fighting pediatric brain cancer.”

Hogs for the Cause invests the money its teams raise back into their home communities. The aid has been massive.

In 14 years, the festival has raised millions of dollars and provided direct grants to approximately 12,000 families with children fighting for their lives.

“When your child has cancer, not just any hospital can take care of them, so sometimes you have to uproot your family to find that treatment,” Louapre explained. “The money we donate helps make that move and stay possible.”

At Children’s Hospital New Orleans, for example, the Hog’s House allows families from across the state and region to stay while their child gets the care she or he needs.

If you attend Hog’s for the Cause this weekend, you’ll be adding to those efforts. A two-day pass starts at $99, while a Friday-only ticket is $50 and a Saturday ticket is $60. You’ll receive a wristband with your entry that you sync with your credit card to allow you to purchase food and beverage.

If you’re a fan of barbecue, music, drinks, a great outdoor festival, and a very worthy cause, you won’t want to miss out. Martha Gilreath, team captain of first-year team “That’ll Do Crew” agrees.

“I can’t wrap my head around not being able to get someone in my family — especially a child — the care they need because of cost,” she said. “Only New Orleanians would tackle that problem by throwing a party. Come listen to amazing music and eat great food, and know that because you came out, hundreds of kids will get the treatment they need. There’s no festival like it.”