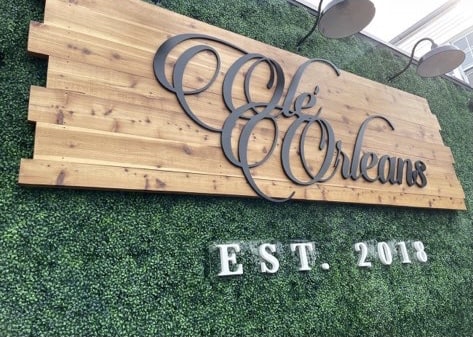 With a portfolio of 17 wines, more than 700 cases sold in 2020 and in-store availability across the New Orleans area, Kim Lewis is barreling forward with her goal of having Olé Orleans wines available in stores and establishments across the entire Gulf Coast.

As a working mother, a schoolteacher and an African-American woman, Kim Lewis isn’t the typical picture of a wine vintner.

She spends her days in the classroom and her nights and weekends split between being a single mother of three, a hands-on maker of wine and the owner and host of her very own tasting room at Ole Orleans Wine & Spirits in Central City.

Unlike many vintners, Lewis does not have a long family history of wine making nor does she have any classical training in the business of wine. In fact, Lewis – an Algiers native and graduate of L. B. Landry High School – holds a bachelor’s degree in psychology from the University of Phoenix. Day to day, Lewis is a special education teacher at Walter L. Cohen College Prep School in New Orleans.

So, how did this 36-year-old go from being a dedicated schoolteacher to being a wine diva and the Crescent City’s only Black winemaker? According to Lewis, it wasn’t easy and it didn’t happen overnight. Like winemaking, it was a process, one that began years ago and is only getting better with age.

A birth from change

From her trucking and transportation company to her health services company that provides care for the elderly and those with disabilities, Lewis by all accounts can be called a serial entrepreneur. She isn’t phased by challenges, and in fact, seems to thrive on them. In 2016, Lewis faced a divorce head-on and embraced her new life with courage, hope and a full glass of wine.

As a self-proclaimed avid traveller, Lewis said she’s always enjoyed wine and the sense of camaraderie it brings to any environment.

“Just being an avid traveller and going around different places and comparing wines, and sitting outside drinking wine with my kids, getting a divorce and drinking wine; everything became around a bottle of wine,” Lewis said.

“Wine brings conversation,” she continues. “It brings people to the table. Wine is a conversation starter. It makes everybody feel good. People love conversing over wine. It just became this thing for me and wine.”

The idea of owning her own wine label began as a joke in conversation with friends following the divorce, Lewis said. But what began as a joke eventually became a reality. Building off the drive of her past entrepreneurial experiences and her own commitment to education, Lewis set out to learn all she could about the wine industry and wine making. She began promoting in 2017, incorporated in 2018 and then fully launched her brand in 2019. Now, Lewis is the only Black-owned winery in New Orleans and the state of Louisiana.

“I developed a really great passion behind it and it just didn’t stop,” she said.

Lewis said she loved learning about the wine industry and the winemaking process, and is a strong believer in self-investment. It was that belief that guided her through the process.

“You have to be willing to invest into yourself,” she said. “That’s what I did for myself and any of my companies that I’ve started. I’ve invested in myself.”

Though it is now nestled at 1232 Oretha Castle Haley Blvd. behind a black iron gate, with an eye-catching “Ole Orleans” written on a large wooden board over a grassy green backdrop, Ole Orleans began as a virtual endeavor. At her onset, she purchased wines from Landry Vineyards in West Monroe and labeled them under her own brand.

“The presence was always there but the goal was to distribute, never to have a tasting room,” she explained. “I started off with distribution first and was pretty comfortable there, but the demand kept coming.”

That demand was from her customers to have a place where they can gather and enjoy her wine in one place that spurred her on to open a tasting room. Eventually, she began buying her own grapes and wine juice in bulk to begin producing herself, a move that also helped increase the availability of her wines to consumers.

Olé Orleans has relationships with other wineries and vineyards that allow her to select some of her own grapes for her wine production.

She now has 17 vintages available on her portfolio, some of whose names are rooted in New Orleans culture and Lewis’ life and upbringing. There is Olé Carrollton, a semi-sweet Blanc du Bois; La Villiage des Chapitoulas (“Tchoupitoulas”); BKK, a cabernet sauvignon named for her children; Five O’ Feaux, a red blend; and a Merlot named Gumbeaux.

Lewis says the work of wine making is tedious and long and she has to make sure it works out with her existing scheduling as an educator, but she is passionate about her product.

While the site is a working facility, Lewis and her team eagerly welcome people to come enjoy the tasting room where they will be greeted by a smiling, warm staff, enjoy a flight of four to five wines (during my visit the flight was three whites and two reds), and a charcuterie board freshly prepared on-site by GrazeDat. Guests will also hear directly from Lewis about her recommendations on pairings as well as the history of Olé Orleans.

As a micro-winery and a small business, Lewis said she faced challenges being positioned to compete in the market.

Lewis said that she sat on one distributor’s book for almost a year “untouched. I think I was in one store,” she said.

That store was Second Vine Wines, a Black-owned wine shop formerly located in the Faubourg Marigny and now located on Magazine Street.

Eventually, Lewis reached out to New Orleans-based distributor International Wine & Spirits, Inc. about being added to the distributor’s inventory.

“International Wine provided me with an opportunity,” she said. “A week or two after being with International, I was already in three or four stores.”

That growth continued, eventually leading to the Olé Orleans brand being sold in stores across the state after only about four weeks time.

“I work hard. I invested in myself. I took everything that I made and I put it into it. No matter what the price was,” Lewis said.

Though an expensive endeavor, it is one to which Lewis is committed. And though she’s had success so far, she recalled how difficult things were when entering an industry with such little diverse representation.

“The state of Louisiana and the city have supported it well,” she said. “It’s almost always someone that is Black-owned or that is African-American involved with that business that can get it past where it needs to go. When I first started and before I had my sales rep, I had so many doors closed on me,” Lewis recounted.

She said that once she added more diversity to her team, things changed.

During the early days, Lewis had reached out to several other wineries and others within the industry seeking advice and guidance to help her build her product and her brand. Few were responsive.

“As far as national, the only people that have been welcoming and that have given advice is the McBride Sisters (of McBride Sisters Collection). Other wine companies, they talk about unity and being there for other African-American businesses and wine company owners but when you contact them they don’t respond. And that’s okay with me. But is it what they promote? No, it’s not. So, I’ve had to deal with that as well. When I started out, I reached out to a lot of people – for help, guidance – and the only people that answered were the McBride Sisters. And I’m forever grateful for that.”

Lewis is in a better position now being more seasoned in the industry and having better support from distributors and consumers alike. “I read a lot. In this business, you cannot be uneducated or unknowledgeable about what it takes to produce or run this business. You will set yourself up for failure.”

For anyone thinking of entering the wine industry, Lewis offers this advice: “Read and be as knowledgeable about what you’re doing and make sure that you get all the information as possible when it comes to starting this business. There are so many loopholes and so many that you can miss and you can end up in a bad situation if you don’t know all the rules.”

“And don’t just slap a label on a bottle,” she emphasized.

In addition to the bottles that can be purchased directly from the winery, Olé Orleans wines can be found in stores across the New Orleans region including at Acquistapace’s markets on the Northshore, Avenue Wine & Spirits, Boomtown Casino, Breaux Mart, Everything Shoppe, Grande Krewe Fine Wine & Spirits, Total Wine, Walmart and Zuppardo’s Family Market, and slated to be on shelves in Target as of February 2021.

With a portfolio of 17 wines, more than 700 cases sold in 2020 and in-store availability across the New Orleans area, Lewis is barreling forward with her goal of having Olé Orleans wines available in stores and establishments across the entire Gulf Coast.

She said she didn’t do it alone, however.

“I had a lot of support. More support than I expected,” said Lewis. “People have reached out to me from all over the world.” David Thaddeus Baker is an award-winning writer and journalist based in New Orleans, LA. Baker is a native of the city, where he works as an associate editor for The Louisiana Weekly newspaper, the oldest existing African-American newspaper in the Southeast Louisiana region.
Baker began working with The Louisiana Weekly in August 2004. In his time as a journalist, his byline has appeared locally in Uptown Buyer’s Guide, Stay Local! A Guide to Commerce and Culture, NPN’s The Trumpet, Louisiana Life, and nationally for Southern Living magazine’s The Daily South.
Since returning to New Orleans post-Katrina, he has worked in community development and organizing, economic development, and communications management within the Greater New Orleans region.
Beyond his professional work, he is committed to the cultural, economic and social wellbeing of New Orleans. As part of his service to the community, Baker currently serves as President of the Board of Directors for MarketUmbrella (operators of the Crescent City Farmers Market), Vice President of the Board of Directors for the Press Club of New Orleans, Vice President of the Board of Directors for Junebug Productions, and Vice Chair of the Board of Directors for the Contemporary Arts Center of New Orleans. In the past, Baker has served as a member of the Board of Directors for Young Leadership Council (YLC), Neighborhoods Partnership Network (NPN), Awesome Foundation (New Orleans), and has chaired Ogden Museum of Southern Art’s Magnolia Ball. In 2019, Baker chaired Young Aspirations Young Artists’ (YaYa) Fall fundraiser “Just Say YaYa.”
Baker earned a Bachelor of Arts in Literature from Dillard University in 2004, and studied Public Relations at Tulane University’s School of Continuing Studies. Baker began his relationship with writing in his early years of high school with short stories and fiction and continued through college.
While at Dillard, he expanded his literary portfolio to include poetry, creative non-fiction and essays, script and playwriting, for which he received the Pearl Cleage Award for Creative Writing in 2004. Baker is a 2017 Gerontological Society of America (GSA) Journalists in Aging Fellow and a 2018 Salzburg Global Forum for Young Cultural Innovators Fellow.
Baker resides in the Gentilly area of New Orleans. He can be reached at [email protected]