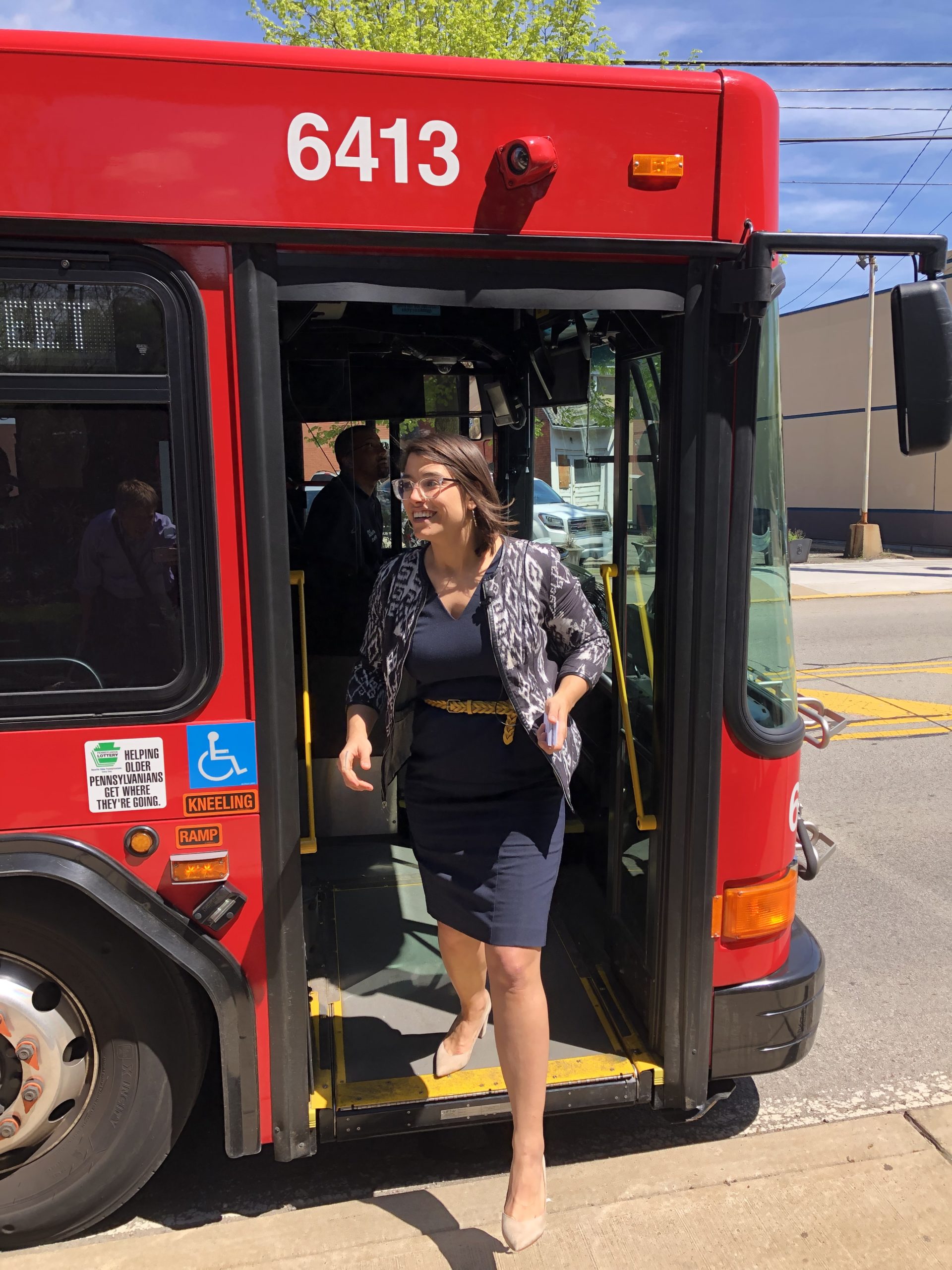 Amongst her people: PA State Rep. Sara Innamorato’s inaugural “Transit Town Hall” took place onboard the 91 inbound bus from Aspinwall to Downtown and back.

You read that right.

Pennsylvania state Rep. Sara Innamorato and her team decided to try a new take on the conventional town hall meeting. The Transit Town Hall took place literally onboard the 91 inbound bus, beginning in Aspinwall and running the full circuit to Wood St. (downtown) and back to Aspinwall.

Alongside our fellow members of the media, Very Local rode along for the town hall. We watched Innamorato greet her fellow riders and constituents. She answered questions, gave directions to her office and even walked through a one-pager with Bike PGH to chat about bike lanes.

We also live tweeted the entire thing. Click below to open our threaded stream from the Transit Town Hall:

Follow along for quotes and snippets from State Rep Sara! pic.twitter.com/2qO64TuogJ

Who is Sara Innamorato?

Sara Innamorato is a Pennsylvania state representative. She was elected in 2018, and her team’s office is located at 5154 Butler St. in Lawrenceville.

Innamorato is a 2004 graduate of North Hills High School and a 2008 graduate of the University of Pittsburgh, where she received her Bachelor of Science degree in business administration.

Coincidentally, her birthday was Wednesday and many folks riding along wished her happy birthday.

Where is her district?

Innamorato represents District 21, which is entirely housed within Allegheny County. There’s an interactive map on her website that allows users to zoom in and see exactly which parts of the city are in her district.

Chances are, if you live in Millvale, Upper Lawrenceville, Sharpsburg or Aspinwall – Innamorato represents you at the state Capitol in Harrisburg.

Do you live in another neighborhood? Wondering who YOUR Pennsylvania state representative is?

Pop in your address, right here.

What role does state government have in public transit?

As a PA legislator, Innamorato has three committee assignments:

The biggest role state government has in public transit is the budget. By allocating PA state taxes (and any other government revenues in the form of tolls and fares) toward building an annual budget, the state government – in combination with federal transportation funds – can affect the day to day experience for folks using buses, light rail, traditional trolleys, subways and other forms of heavy passenger rail, monorail or ferries.

Interested in learning more? We found this March 2019 article in WESA that walks through issues related to funding public transit in Pennsylvania.

And this write up in The Morning Call about how PA taxes are allocated toward public transit.

Aspinwall
Getting there
Aspinwall, PA 15215, USA
Get directions