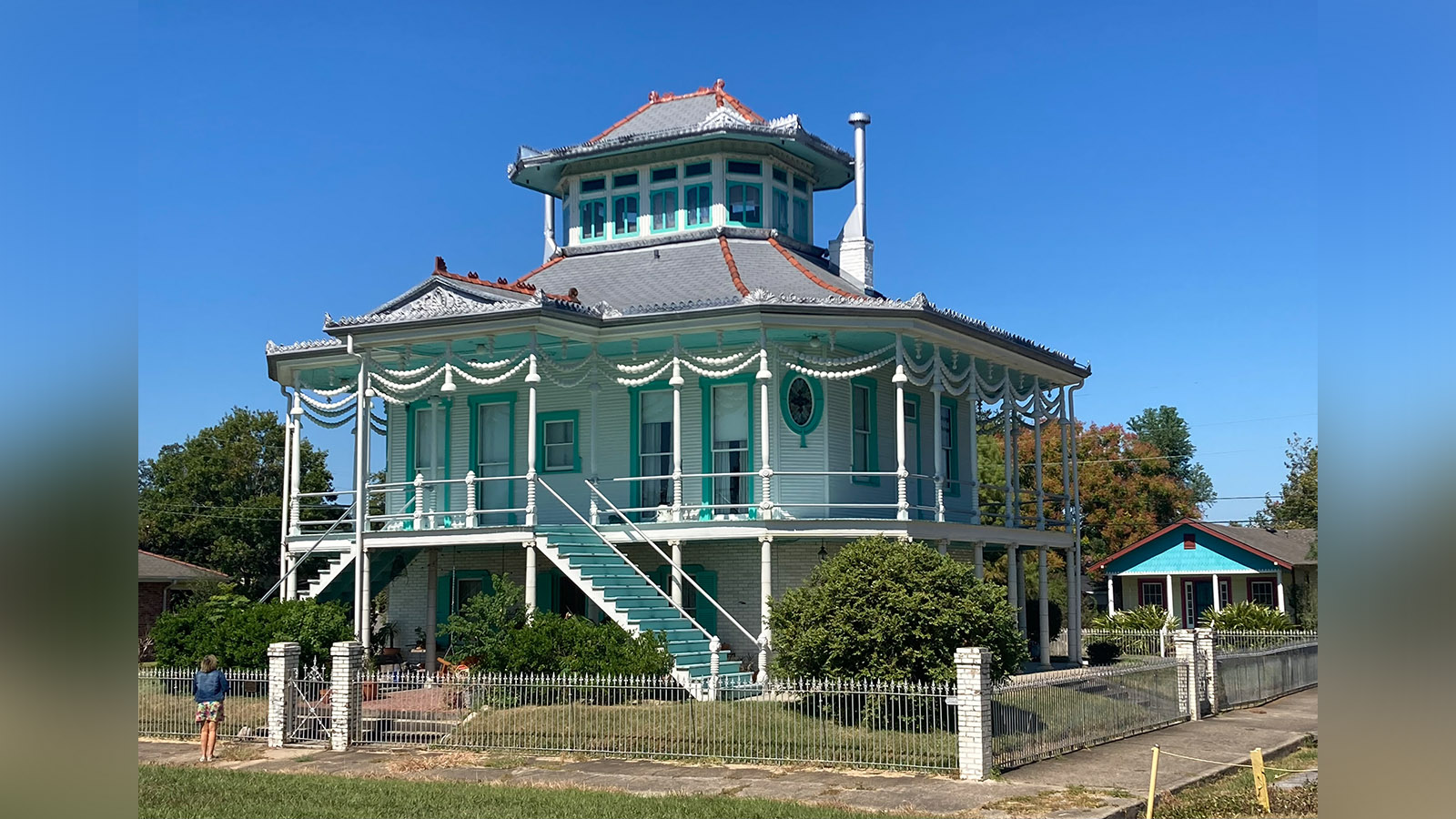 The Doullut family built the twin homes in the early 1900s by hand. The Steamboat Houses are located in the 9th Ward Holy Cross neighborhood.

The confections that are New Orleans’ two Doullut Steamboat Gothic Houses rise incongruously above the other, far humbler, structures in the largely working-class Holy Cross neighborhood that hugs the Mississippi River from the eastern side of the Industrial Canal to Jackson Barracks, where Orleans Parish gives way to that of St. Bernard.

Their provenance is as unusual as their appearance. The first, located at what is now 400 Egania Street, was built in 1905 by husband and wife steamboat pilots, Captains Milton and Mary Doullut, at a time when the words “riverboat pilot” and “captain” were more likely to conjure the image of a swarthy pirate than that of a woman in billowing skirts steering a vessel through murky waters with a child at her knee.

Milton Doullut had long made his life’s work in maritime careers, including that as a boatbuilder, before making the acquaintance of his soon-to-be seafaring bride. Mary Doullut was the first woman to earn a pilot’s license, and the duo traversed the river attending its considerable role in the commerce of the day.

When it came time to build a home for his family, Milton Doullut did so in the Lower Ninth Ward on a plot of land near the river’s edge with a pier connecting it to the waterway. A 1920s levee project necessitated relocating the home from the river’s edge to what is now the southwestern corner of Egania and Douglas streets. With the help of his son, Paul, and a single helper, the captain built the house by hand over 18 months in his spare time.

In 1904, the year before Doullut started construction on the house, the World’s Fair was held in St. Louis, Missouri. Japan was becoming politically and culturally more influential, and the small but mighty country erected a vast pavilion at the fair. As one in six Americans traveled to the fair, many by means of the Mississippi River, it can be surmised that the pelagic Doulluts paid a visit and took the inspiration for the home’s green-tiled Pagoda-style roof from that exposition. It would have been the place where most Americans would have first been exposed to Far Eastern architecture. For added flair, the roof, with its gently lilted corners, was trimmed in filigreed metal.

Inspiration for the rest of the home’s unusual architecture came directly from the family’s beloved steamboats.

The bottom floor of the house is slab on grade rather than raised, as was the custom of the day. Like the hull of a boat, the space was designed to be hosed or bailed out should the need arise. As such, the walls, floors, and supporting pillars, both inside and out, were clad entirely in ceramic tile. Single doorways to the front and rear of the first floor and two each to either side would have aided in clean-out efforts. A wraparound second-floor gallery is planked in thin strips of painted wood to resemble a vessel’s deck. Oval stained-glass windows at each of the four chamfered corners of the house are reminiscent of maritime oculi. A third-floor octagonally shaped cupola clad entirely in windows was clearly inspired by a ship’s wheelhouse. The windows open to admit the river’s breezes and afford panoramic views. Metal chimneys set to either side of the cupola evoke smokestacks

Carved strings of massive cypress “beads” hang in swaths atop the second-floor gallery, its ceiling, like that of the first floor, covered in pressed tin painted a pale azure to deter wasps or malevolent spirits, depending on who you ask.

So enamored were the Doulluts of their striking riverfront home, they set out to build its twin for their son Paul just across the way at what is now 503 Egania Street.

The second-floor interiors of both houses consist of four rooms bisected by a central hallway. Within each, a narrow staircase leads to the window-lined third-floor cupola.

Save for minor differences, the exterior appearances of the houses remain the same. Both have added two car garages. One has a more intricate paint job and more extensive landscaping than the other. The Doulluts’ preventative first-floor design preserved both houses when each took on five feet of water following the Hurricane Katrina levee failures. Both houses were named to the National Register of Historic Places in 1977, and they are worth the time it takes to check them out. Jyl Benson began her editorial career in 1990 with The Times Picayune in New Orleans and served as a regional reporter covering the southeastern United States for both The New York Times and Time magazine. She wrote Galatoire's Cookbook: Recipes & Family History from the Time-Honored New Orleans Restaurant (Random House 2005) as well as several cultural, historical, and architectural guides to New Orleans. She served as Editor-In-Chief of Louisiana Cookin’ magazine from 2009 to 2011 and founded Louisiana Kitchen & Culture magazine in 2012. Her most recent cookbook Louisiana's Tables (Great Texas Line, 2017) explores the state's culinary culture based on settlement patterns. Fun, Funky, Fabulous: New Orleans Casual Restaurant Recipes (Pelican Publishing) was released in 2015. She currently serves as a columnist and feature writer for Acadiana Profile, Louisiana Life, St. Charles Avenue and New Orleans magazines. Her weekly blog “Side Dish” is sent to 40,000 readers weekly via myneworleans.com. She lives in Uptown New Orleans with her husband and four needy dogs.