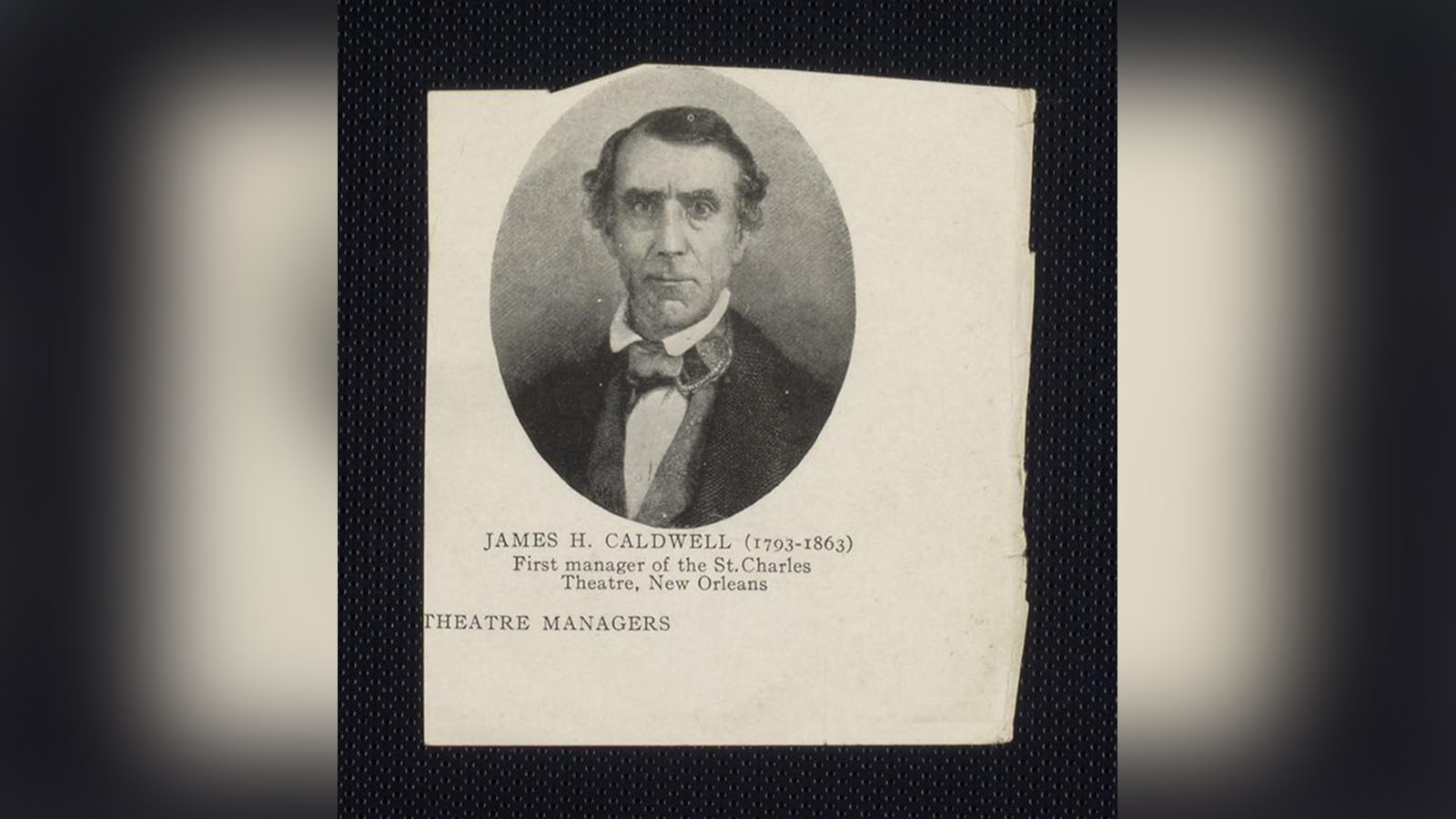 How an English Actor Brought Light to New Orleans

While the days of gas streetlights are mostly a thing of the past, the mark James H. Caldwell made on New Orleans by creating her first gas light company has never faded.

Gaslight. It’s such a disturbing word today that it’s hard to think of a time when actual gas lighting was coming into vogue. Regardless of the term’s current sinister connotations, gas light itself was a miracle of an invention. The ability to have clean burning gas at home or along city streets helped reduce the risk of fire from oil lamps and provided stronger light. While the days of gas streetlights are mostly a thing of the past, the mark James H. Caldwell made on New Orleans by creating her first gas light company has never faded.

James Henry Caldwell came to New Orleans as an actor and theater manager. The ambitious young man had immigrated from England in 1816 at the age of 23. After performing a few theatrical seasons in Baltimore, Caldwell brought his theatrical troupe to New Orleans in 1820 where they worked in French theater for several years. Wanting to increase his fortunes, he built the American Theatre on Camp Street in 1822.

Opening a theater on Camp Street was risky.  At that time it was an uninhabited part of the city. But the popularity of Caldwell and his troupe encouraged other businesses to build in the area and the American section of New Orleans was born.

Possibly the most famous actor in the South from 1820 to 1843, Caldwell ensured steady work by creating a theatrical circuit encompassing New Orleans, Natchez, Huntsville, Nashville, St. Louis, Louisville, and Cincinnati. This kept his troupe working year-round in addition to having winter seasons in New Orleans and summer seasons in the other cities. To keep the odds of being able to work up, Caldwell built or helped to build new theaters or renovate older ones in nearly every city he worked in.

Perhaps it was fate then that a theater would make sure Caldwell was in business for a very long time.

Gas lighting got its start in English theater. A young German engineer created an experimental lighting system involving a gas generator. This system was used to fuel footlights in a small theater in 1803 and by 1817 the English Opera House in London was completely lit by it. Being familiar with the system and its possibilities, Caldwell installed the machinery to have his American Theatre lit by gas instead of oil.

For the soft opening of the Theatre, an exhibition of the first gas lighting in New Orleans was scheduled to take place after the performances. Advertisements for the demonstrations ran on May 17 and 19, 1823. The preview of gas lighting was enough to ensure that when the American Theatre had its grand opening on Jan. 1, 1824, the house was filled to standing room only.

There were 250 gas lights in the theater including the outside lamps, stage footlights, and an impressive chandelier. The lighting was achieved through a gas generator and gas holding tank, or gasometer, located behind the theater and pipes which ran under the theater stage. When the doors opened to the American Theatre it was only the third theater in the U.S. to be lit with gas light.

To capitalize on the success of his gamble, Caldwell attempted to form a gas company in 1829, but the deal fell apart shortly after. His second try was more successful and on March 1, 1833, Caldwell secured an exclusive charter to manufacture and sell all gas lighting for the City of New Orleans. The responsibility of creating his gas works led him to retire from the American Theatre the same year.

By April 17, 1834, Caldwell was secure enough to announce the conditions of sale for gas to the public. The cost would be $7 per 1,000 cubic feet of gas with an estimated 3,000 cubic feet to be used in a year. Bills were to be paid monthly and every customer would have to pay $12 for a meter to be installed. The gas company provided pipe to the home but the customer paid for the pipe fittings.

While the public contemplated the cost of the new lights, Caldwell had his hands full making sure pipes were being laid correctly and negotiating with the company’s board of directors. Things were further complicated for him when, while digging trenches for the gas pipes, people began to petition Caldwell to have the open holes closed by nightfall to prevent people and horses from falling into them in the dark.

Despite the obstacles, on Aug. 8, 1834, gas light blazed forth at the American Theatre on Camp Street and the Exchange on Chartres Street. Even Caldwell’s detractors were forced to admit his experiment had worked. Finally, after years of effort, the New Orleans Gas Light and Banking Company was in business.

The next hurdle was to have the City Council sign off on the plan to erect and maintain streetlamps. These new gas lamps would replace the current city system of oil lamps which had proved ineffectual and sometimes dangerous with the threat of fire spreading. Mayor Prieur stalled on the principle the cost for each streetlight was too high, but Caldwell refused to budge. So, when the City Council signed the terms to adopt the gas contract on Feb. 18, 1835, the mayor vetoed it. It wasn’t until two years later that the gas works and the mayor reached a compromise of $30 a streetlamp instead of the requested $45.

Caldwell shuffled a great deal of real estate around in 1835 and 1836 and double mortgaged several properties to obtain loans as he planned his return to the theater. With the completion of his St. Charles Theatre in 1836, he regained theatrical dominance in the South fairly easily. However, the Panic of 1837, a major financial crisis caused by a real estate bubble bursting in the U.S. which led to a national economic depression, stopped him from returning to the theatrical circuit he’d created.

That was just the start of his troubles. When the state legislature investigated the gas company and bank in 1838, it was found Caldwell had been granted 500 shares of the bank in violation of the charter. Additionally, he had $163,182 in outstanding loans to the bank and gas company due to his heavy multiple mortgaging of properties. By 1841, Caldwell’s finances were so strained he sold the St. Charles Theatre and St. Charles Arcade to pay his debt to the bank before leaving for Ohio that summer. And in 1842, the old Camp Street theater burned and couldn’t be rebuilt as the building was uninsured.But not all was lost. Caldwell had also founded gas light companies in Mobile and Cincinnati. His investments in these other gas works paid off and his family was left substantial shares in the gas light companies of Cincinnati and Mobile after his death in 1863.  Though not well known today, James Caldwell left behind a legacy of illumination.