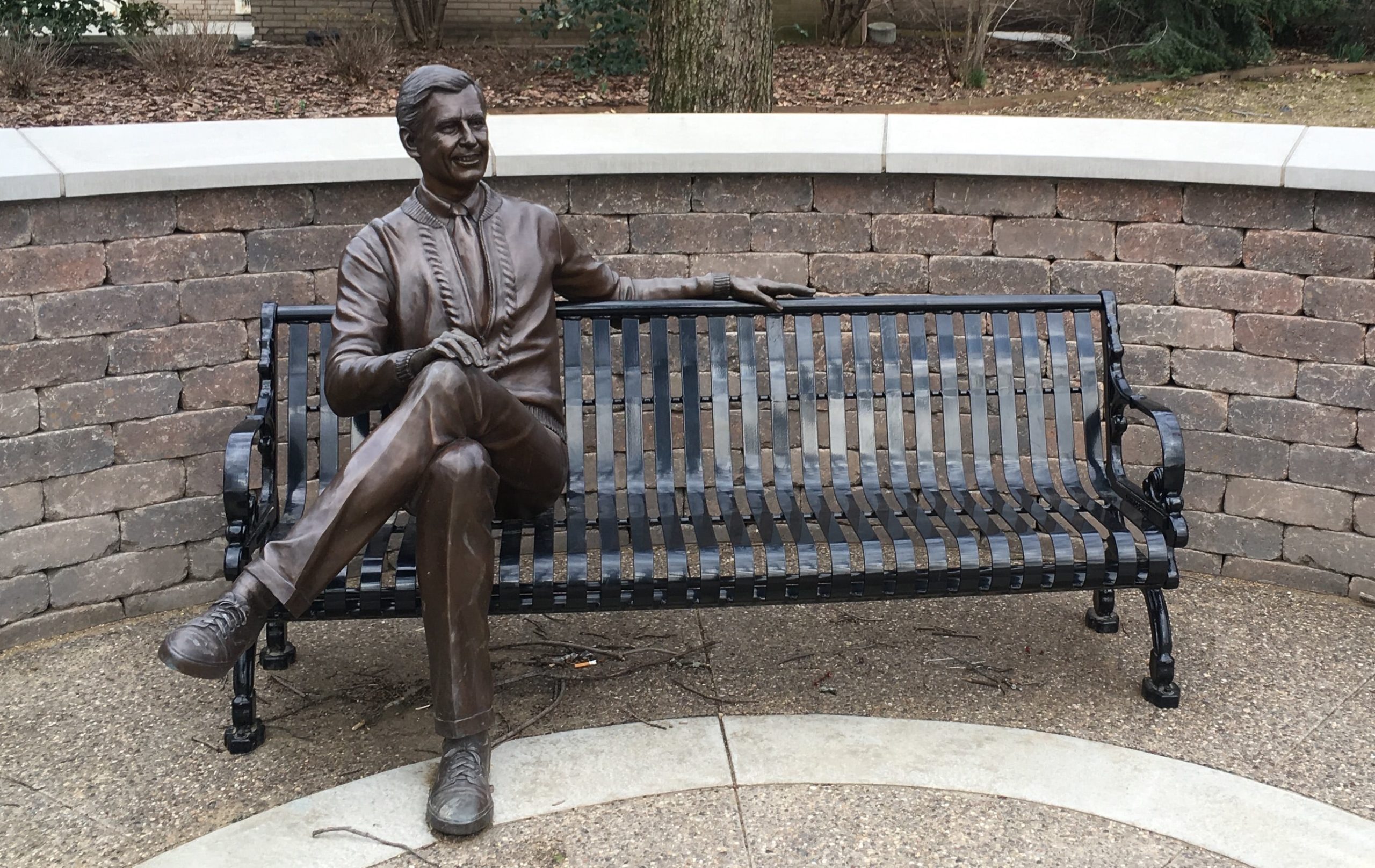 Latrobe is the birthplace of Fred Rogers, Arnold Palmer and the banana split.

This August 31 marks twenty-one years since the final new episode of “Mister Rogers’ Neighborhood” aired on television. That means the youngest original members of the program’s target audience (preschoolers) are now in their mid-twenties. If that has you feeling old, nostalgic, or a bit of both, we’re sharing three suggested itineraries for trips down memory lane, two in Fred Rogers’ real-life neighborhoods, and one online.

Fred Rogers grew up in Latrobe, a small town located about 40 miles southeast of Pittsburgh. Located in the lush foothills of the Laurel Highlands, Latrobe is an easy 45-minute drive from Pittsburgh, and it’s a nice day trip in summer or fall when the leaves change.

Latrobe’s other claims to fame include being the birthplace of both the banana split and Rolling Rock beer, the location of the Steelers summer training camp (in non-pandemic times), and the hometown of golfer Arnold Palmer, who attended high school with Fred Rogers.

Here’s a suggested itinerary for a trip to Mister Rogers’ Latrobe neighborhood, complete with a few fun side trips for kids and adults.

Planned under Fred’s guidance, The Fred Rogers Center for Early Learning and Children’s Media at Saint Vincent College continues his work to “help children grow as confident, competent, and caring human beings.” On the upper level of the building, a public multimedia exhibit features a display of Mister Rogers’ famous cardigans and shoes, puppets and set pieces from the Neighborhood of Make-Believe (including Daniel Tiger’s clock), along with various artifacts, photos, and videos. There’s even a “Speedy Delivery” letter writing station. The Fred Rogers Exhibit is free and open to the public 8:30am to 4:30pm, Monday through Friday. (The exhibit and building is closed on weekends.)

Also see: While you’re on campus, check out the beautiful Basilica, or the Winnie Palmer Nature Reserve, named for the wife of Arnold Palmer. You can also stop by the Saint Vincent Gristmill, which has been in continuous use since Benedictine monks built it in 1854. The gristmill’s general store sells fresh-baked bread, jams, and a variety of flours and meals still ground by the monks.

As you leave the Saint Vincent campus and continue down Route 30, you’ll see Arnold Palmer Regional Airport. (Arnie was one year younger than Fred, and his father supposedly once gave Fred a golf lesson.) As you enter downtown, pass City Brewing Company and think fondly of the little green pony bottles of Rolling Rock beer that used to be made here. If the weather’s nice, park the car and stroll through downtown on foot. Be sure to look up at the street signs, adorned with the image of the Trolley from “Mister Rogers’ Neighborhood.”

Take a seat—and a selfie—with Mister Rogers in the James H. Rogers Park, named for Fred’s father, who was a local businessman and philanthropist. On a bench in this small, shady park, you’ll find a soothing fountain and a lifelike statue of Mister Rogers created by sculptor Jon Hair.

Just around the corner from the Mister Rogers Statue is Latrobe Art Center, co-founded by Fred’s sister, Nancy “Laney” Rogers Crozier. (Rumor has it that Fred modeled the puppet Lady Elaine Fairchilde on her, but no one would ever truly confirm or deny it!) The Center features a free gallery with artwork by regional artists and the shop with Mister Rogers’-themed items. Located inside the Center, Ricolita’s Café serves breakfast and lunch. (The center and café are both open Monday through Friday, 10am – 5pm. On Saturday, the café is closed, but the art center is open 10am – 3pm.)

On the same block as the Art Center sits a giant sculpture of a banana split, which, according to the accompanying historical marker, was invented on this site in 1904 at Tassel’s Pharmacy. The soda fountain that Fred reportedly visited as a kid is no longer there, but you can get a mean banana split a few blocks away at 512 Coffee & Ice Cream (see below).

Get your very own banana split (or other treat) at 512 Coffee and Ice Cream. The shop, located on the first floor of a restored Victorian house, offers local goodies, including pastries from Prantl’s Bakery, ice cream from Kerber’s Dairy in North Huntington, and coffee made with beans from Mechanic Coffee in Verona. David Newell, who played Mr. McFeely on “Mister Rogers’ Neighborhood,” stopped by this summer, so you know it’s a friendly neighborhood place! Sit inside next to a marble inlaid fireplace or lounge outside on the wraparound porch. (Closed on Monday.)

Fred McFeely Rogers was born on March 20, 1928, at 705 Main St. to James Hillis Rogers and Nancy McFeely Rogers. (Yes, Mr. McFeely, the Speedy Delivery man on “Mister Rogers’ Neighborhood,” was named in honor of Fred’s maternal grandfather, Fred McFeely.) The little boy who would become the famous Mister Rogers grew up at 737 Weldon St., where he spent many hours in his attic playroom, surrounded by puppets and his own imagination. (Both of these houses are private residences, so please be respectful as you drive or walk past.)

In a 1999 interview for the Archive of American Television, Fred said, “I have no fear of dying. And I would be very glad to talk with anybody of the joy of going on. What’s next? It’ll be fun, too. I have a great trust in God’s constant care. This is just one chapter in a long, long book, this part that we call being on Earth, you know?” He died several years later (February 27, 2003) at the age of 75, not long after ending production of “Mister Rogers’ Neighborhood.” Fred is buried in a mausoleum alongside his parents and his wife Joanne, who died in January. The mausoleum is marked with the name “Given,” and it sits near the back of the cemetery. The cemetery also offers lovely views of the surrounding Laurel Highlands.

Fred graduated from Pittsburgh Theological Seminary and became an ordained Presbyterian minister in his thirties. In Latrobe, his family attended Latrobe Presbyterian Church, where young Fred was baptized and sang in the children’s choir. Next to the church you’ll find a small prayer garden, plus the preserved school bell on the former site of Fred’s elementary school.

The Latrobe Area Historical Society has a small display dedicated to Mister Rogers. The Society is open to the public just a few hours per week, so check the website for hours.

The Chamber has a small display of memorabilia, props from the TV program, and photos of Fred and his family from a personal collection.

The building where Fred attended high school is now privately owned, but you can walk or drive past it (at 1501 Ligonier Street) to see where he served as student council president and editor of the school yearbook. The current high school (131 High School Road) houses a collection of photos from Fred’s school days, as well as memorabilia from “Mister Rogers’ Neighborhood.” The display is open to the public during school activities, so check in advance if you’d like to visit.

More field trips! Fun stops near Latrobe with a connection to Fred Rogers

If you’re looking for other things to do in and around Latrobe, try these field trips.

As an adult, Fred Rogers swam laps nearly every single morning of his life. Cool off with a dip at the Rogers-McFeely Memorial Pool, which is part of Legion-Keener Park, a 52-acre site situated along Loyalhanna Creek, featuring playgrounds, sports fields, nature trails, and picnic areas.

If you have little kids in your life, take them to Idlewild for a trolley ride through “Daniel Tiger’s Neighborhood,” the animated television series inspired by “Mister Rogers’ Neighborhood.” The amusement and water park are located in Ligonier, about 8 miles from Latrobe.

This nature area (with the most wholesome of names!) belonged to Fred Rogers’ grandfather, Fred McFeely, until 1956. Young Fred often visited the family property when it contained a cottage, horse stables, outbuildings, and a swimming area in the creek above the falls. Fred credited his grandfather, who was lovingly known to his family as “Ding Dong,” with being the inspiration for his famous affirmation: “I like you just the way you are!”

Fred fondly recalled visits with Ding Dong: “He had a lot of stone walls on his place. And you can understand my mother and grandmother, they didn’t want a scratched-up kid. … But…he knew there was something more important than scratches and bones. I climbed that wall. And then I ran on it. I will never forget that day.”

Visitors can still see the stone foundations and retaining walls from the estate. Buttermilk Falls is located 26 miles east of Latrobe and features a 45-foot waterfall, scenic woodlands, and hiking trail.

If you’re looking for a cold pint and a light bite, stop by Four Seasons Brewing Company, located just down the road from the Saint Vincent campus. Beer may not be the most Mister Rogerly thing you can drink, but this friendly community pub, opened in 2013, has a nice neighborly vibe.

This guide was created for Very Local by Jenna McGuiggan. Jenna is the co-author of the book “Mister Rogers’ Neighborhood: A Visual History” [Amazon, Bookshop.org] which takes a look inside the Fred Rogers archive in Latrobe. You can listen to our interview with Jenna about the book and some of the things they found in the archive here. Jenna McGuiggan co-authored Mister Rogers’ Neighborhood: A Visual History (Clarkson Potter, 2019). She writes, edits, and teaches creative nonfiction. Her essays and articles have appeared in a wide range of publications, including magazines, literary journals, and anthologies.

She received her MFA from Vermont College of Fine Arts and lives in southwestern PA with her husband and several grey cats. Visit her online in The Word Cellar.

We visit 3 great spots for rock climbing, white water rafting and sailing (all less than 90 minutes from Downtown Pittsburgh).

Did you know that Mister Rogers was colorblind? Press play and learn more about everyone’s favorite neighbor.