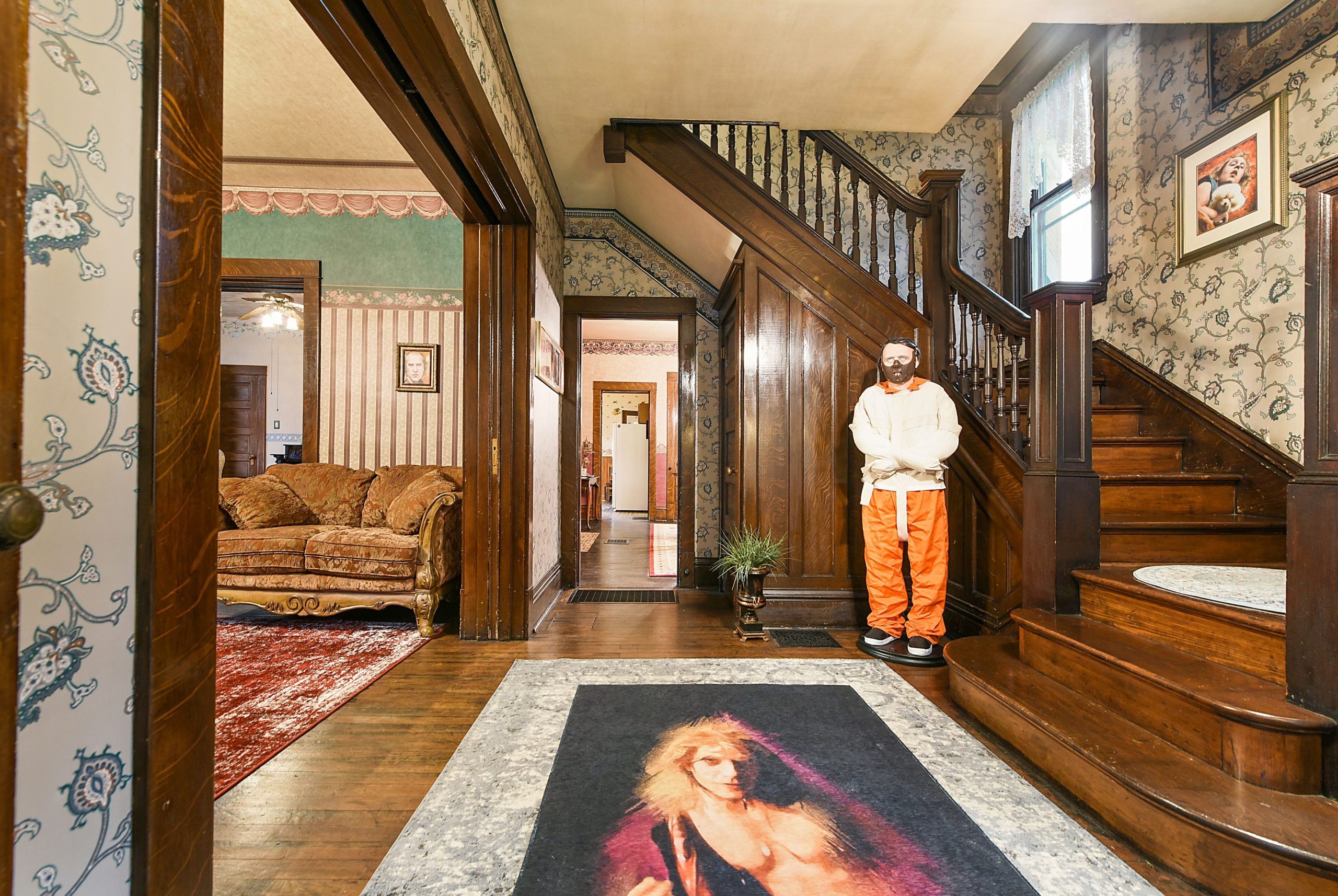 For a real scream, rent Buffalo Bill’s House from “The Silence of the Lambs”

Just outside Pittsburgh lies a macabre icon, complete with a statue of Hannibal Lecter.

Buffalo Bill’s House in “The Silence of the Lambs” is the stuff of nightmares, but for diehard fans of the film, staying there is a dream come true.

You can now rent the fictional serial killer’s abode in Perryopolis, Pennsylvania, which is 30 miles outside of Pittsburgh. Parties of up to eight people can relax in the fully furnished, 112-year-old home, watch the iconic movie and enjoy liver, fava beans and a nice Chianti in the kitchen. (Like Hannibal Lecter, you’ll have to hunt down your own ingredients.)

Last October, Chris Rowan, a self-described horror geek who lives in New Jersey, read an article about the iconic piece of real estate. By the beginning of this year, he owned it.

“Horror has always been omnipresent in my life,” he says. “Buffalo Bill’s House is a melding of my passion for horror movies and my career.”

As a film industry professional and longtime host of the annual New York City Horror Film Festival, he knows people are drawn to cinematic destinations like moths to a flame. He’s visited the “Friday the 13th” campground in New Jersey, “The Amityville Horror” house on Long Island and Freddy Krueger’s Elm Street digs in California.

Buying the Fayette County building was a no-brainer for Rowan, who first saw the flick during its 1991 theatrical run.

His experience as an art director and prop stylist makes him the perfect person to bring the deadly on-screen setting back to life for fans to enjoy. No other filming location in the country has this level of privacy and exclusivity, Rowan says.

Patrons are given an electronic key code and have full access to the building and grounds, which are monitored around-the-clock by an outdoor video surveillance system. Bill’s isn’t a bed and breakfast that rents individual rooms but rather, a private home rental where guests and their booked party get exclusive use of the home. Think of it as more of a macabre Airbnb.

The Queen Anne Victorian-style structure has four bedrooms, a grand foyer, living room, dining room, kitchen and parlor, which are all decorated with “The Silence of the Lambs”-themed artwork (much of which has been donated by artists around the country) and screen-used items. The attic, dubbed Buffalo Bill’s Playhouse, is a retro-inspired game room that features a pool table, books, vintage arcade games, a 65-inch, flatscreen TV and more than 400 movies on DVD and VHS.

“It puts the lotion on it’s skin, or else it gets the hose again…”

Although the basement well scenes were filmed in a warehouse near Pittsburgh, Rowan is in the process of recreating the set in the existing coal cellar, complete with lotion in a basket. Meanwhile, visitors can hang out in Buffalo Bill’s workshop, which is tailor-made for selfies and TikTok videos. Don a kimono and dance to “Goodbye Horses” under a disco ball.

With the exception of service animals, real pets aren’t allowed on site, but there’s a toy Bichon Frise named Precious that’s available for photo ops. Customers also receive a complimentary bottle of Buffalo Bill’s House Body Lotion and other “Silence” swag. You can stock up on T-shirts, enamel pins, lip balm, face masks and gory gifts for friends and family.

So, what’s it like to stay at Buffalo Bill’s house?

After winning an Instagram contest in June, New Yorker Jeanette Milo — a graduate of Pittsburgh-native Tom’s Savini’s Special Makeup Effects Program — was the first guest to stay at Buffalo Bill’s.

The lifelong cinephile has visited dozens of filming locations over the years, but this was more a visceral vacation for Milo and her fear-loving friends, who find a strange sort of comfort in horror flicks.

“You don’t forget a movie like this one,” she says. “To recreate the scenes in the same house they were filmed in is a thrill only true fans understand. This boutique accommodation has so many memories just waiting to be created. I’m so lucky to have been the first.”

Most of the year there’s a one-night minimum stay, but you must book for two-nights during major holidays, including Valentine’s Day, which is the movie’s release anniversary.

This project is a labor of love for Rowan, who’s been meticulously setting the stage for a year. He hopes to collaborate with local businesses to flesh-out the vacation for tourists.

You don’t have to be a sleuth like Clarice Starling to find other “Silence” filming locations in the area. Rowan provides information on famous spots within an hour’s drive of Bill’s pad, including Soldiers & Sailors Memorial Hall, Carnegie Museum of Natural History and the apartment complex where Buffalo Bill abducts Catherine Martin. Horror devotees can also visit Evans City Cemetery — where the opening scene of George A. Romero’s “Night of the Living Dead” was shot — and Monroeville Mall, backdrop for his follow-up “Dawn of the Dead.” (The director even has a blink-and-you-miss-it cameo in “Silence”.)

Rowan will soon offer guided tours to folks who want to check out the scene without checking in overnight. Professional filmmakers can rent the space for shoots and pray that the success of the Oscar-winning picture rubs off on their work.

In the future, the house will host film screenings, dinner parties and special events with celebrity meet-and-greets.

“Buffalo Bill’s House is a legitimate family business run by people who are passionate about the film,” Rowan says. “I want to be a part of this community and share this experience with the rest of the world.”