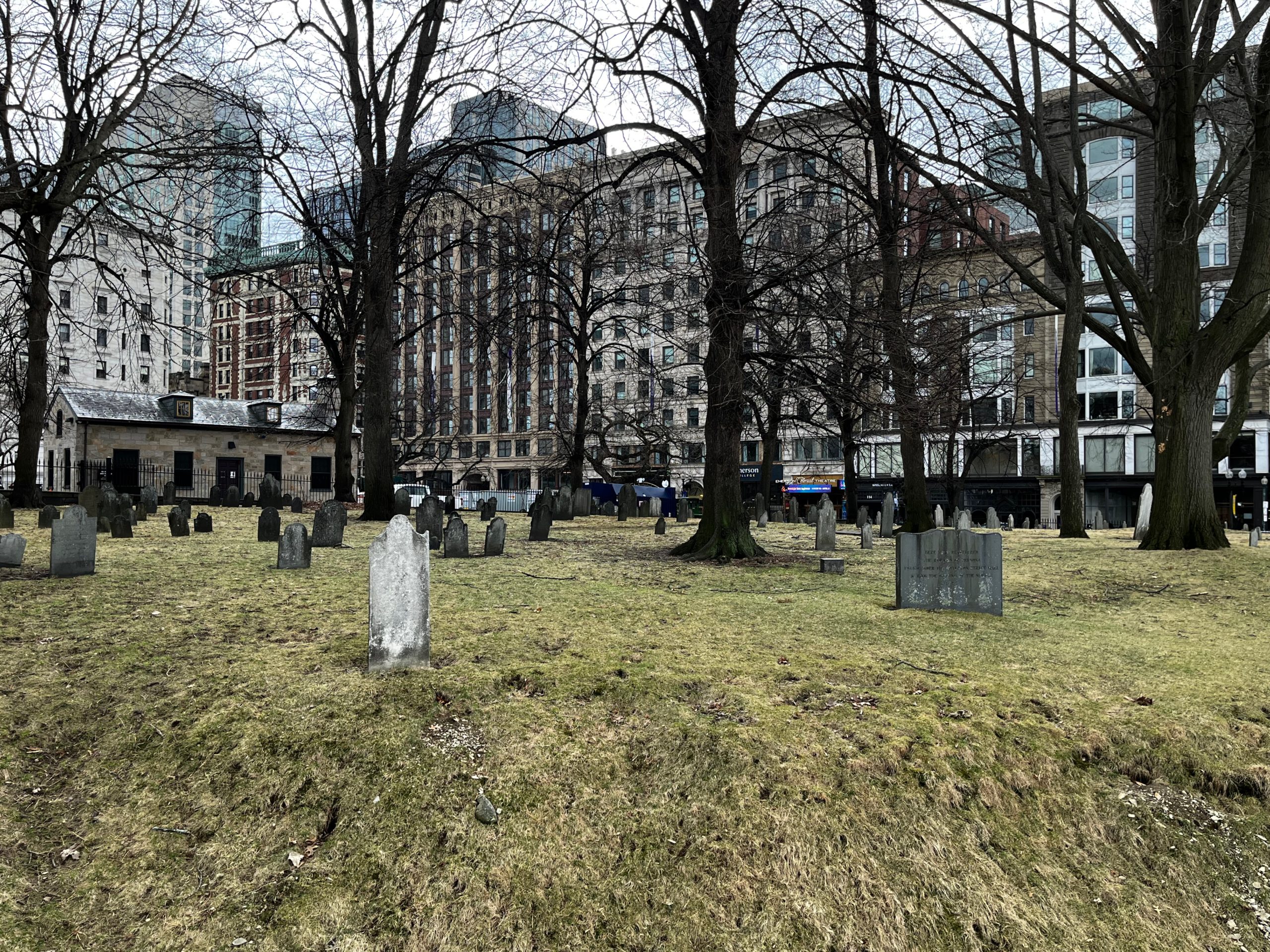 Ghosts of the Boston Common: The Central Burial Ground and Its Residents

While today many take a relaxing walk or picnic on the Common Grounds, it is home to a number of ghostly residents.

While the Boston Common is now one of the most visited tourist spots in Boston, frequented by sunbathers, dog walkers, and most people walking our famous Freedom Trail, it hides a darker history of violence beneath the lush grass and weeping willows.

Due to its long history of Puritan faith, Boston was responsible for putting women to death under the guise of being witches. For almost two hundred years, the original center of Boston functioned as a public gallows. It was the site of numerous executions, a whipping post, and the town stocks. Thirty-five years before Salem, Massachusetts, became infamous for its witch trials in 1692, Boston had been participating in the hanging of women who were convicted of consorting with the devil.

Want to learn more about Salem? Click here to see our guide to a weekend getaway in Salem on “Eat Play Stay.”

Anne Hibbins was hung from the now fallen “Great Elm”— ironically planted for prosperity— in the Common’s center for speaking her mind and disagreeing with the carpenter working on her house. They were hung from the same tree as pirates and murderers, merely for being more outspoken than the men who ruled the city believed that they should be. Reverend Cotton Mather, who would later cement himself in Massachusetts’ history by participating in the Salem Witch Trials, had a hand in sending women like Anne to their deaths.

Suppose that wasn’t enough to contaminate and haunt the grounds that many people have picnics. In that case, it is also the site where at least 50 Indigenous People were shot and hung for fighting to keep their land and participating in King Philip’s War. These warriors, much like the innocent women, were hung in the same place where criminals were put to death.

Sat at the top corner of the Common and established in 1756, the Central Burial Ground was the fourth cemetery created in Boston. It was designed to alleviate the overcrowding of the other three in the city: King’s Chapel, Copp’s Hill, and Old Granary. While it is home to at least 5,000 burials, there are only 487 tombstones and 282 tombs surrounding “The Dell.”

It is the least popular of the old cemeteries, with only a few famous Bostonians buried there. They include Gilbert Stuart, the portraitist who painted George Washington’s portrait that is featured on the one-dollar bill, and composer William Billings. Most of the people shoved into the small plots and not given the decency of a proper resting place were French Roman Catholics, foreigners, British common soldiers who had died during the Revolutionary War, and patriots who died at Bunker Hill and the Boston Tea Party.

Already overcrowded and mostly unmarked, the burial grounds were further desecrated in 1836 when Mayor Samuel Armstrong extended Boylston Street to connect with Tremont. This cut into a corner of the graveyard, eliminating a row of tombs and causing the bodies to be unsettled. They were reburied in a long barrow called “The Dell,” where the bodies were stacked on top of one another with no grave markings or people to remember them by.

Furthermore, in 1894 during the construction of the first subway in the United States, while digging tracks under Boylston, the crew uncovered 900 bodies of British soldiers who had perished during the occupation of Boston. Their remains were reburied in a mass grave with a tablet and three boundary stones. It callously reads: “Here were interred the remains of persons found under the Boylston St. Mall during the digging o the subway, 1895.”

The Restless Spirits of the Boston Common

For years, people have reported strange feelings and brushes with the paranormal— in the daytime and at night. It has become known as one of the most haunted places in the state. Most people report that it is colder amongst the worn graves and wayward burials at the back corner of the Common. One local described a feeling of deep sorrow upon entering. She said it “felt like being in a crowded place, with many people expressing the will to leave.”

Men have been seen in old military uniforms, walking through the rows of resting places, only to disappear around a bend. Two women have been seen frequently, walking arm in arm, wearing early 19th-century clothing, and sitting on one of the many benches you can rest on. Many believe them to be some of the innocent women hung for being supposed witches. People have reported strange sounds, wandering ghostly figures, and even silent glowing forms that follow people throughout their stroll down the dated paths.

One Dr. Rutger was walking through the cemetery in the afternoon when he spotted a young girl in an oversized, dirty white dress. She was staring at him, unblinkingly, almost restlessly. Even as he kept walking, moving away from the little girl, she continued to pop up wherever he looked. Was she following him? Did she need something? Rutger, realizing that she was not just a girl on a field trip, hastened to get out of the haunted place when the girl materialized in front of him right before she faded away. He felt instant relief as he walked down the sidewalk, distancing himself from the little girl and the graveyard. That is until he went to put his car keys in the door, and he felt a cold hand grab them from him and toss them on the ground. Apparently, trying to keep him there.

As for my experience, I didn’t have the luck of seeing any specters — malicious or benign — but I think that I could feel the weight of all those interred there; I was glad I visited on a bright day and that there were people about.

So, would you venture into the resting places of those forgotten, hoping to catch a glimpse of women and men who were never able to move on? Maybe say hello to a little girl who might try to steal your keys?

For more on the ghosts of Boston Common Michela Rahaim knew she was destined to be a writer from her early obsession with punctuation and fascination with magical realism. She has written for the Borgen Project and The Mighty, and is currently working on her first novel.

A classic mountain showdown has this hopping ski town divided. But everyone agrees that no matter which mountain reigns supreme, this four-season hot spot offers great food, bucolic retreats, and a whole new view on the great outdoors.

From boozy margaritas and snug motels to exhilarating ziplines and thrilling coasters. This is the Berkshires.

Join Rob Mariano to explore some of the hidden gems that East Boston has to offer.  East Boston, a melting pot of cuisines and cultures, is known for its vibrant neighborhoods, some of Boston’s most diverse eateries and the best waterfront views the city has to offer. (And, of course, Logan Airport.) Learn more about…

When the masks come off, the heat is on.

7 years ago, Gabbi was paralyzed and diagnosed with cancer, this year she is running the Boston Marathon.

A Tour of Boston Punk Rock History Past and Present

When a city is nicknamed “Rat City,” you hope it’s for a good reason. Allston, Massachusetts is that city, so-called thanks to its place in Boston’s punk rock history.